Lady Gaga’s many face masks and over-the-top fashions may have been the focus of the 2020 VMAs, but her hair also held a hidden meaning.

The pop star Lady Gaga, 34, made her entrance on the virtual red carpet in New York City on Sunday wearing an intergalactic silver couture look by Area accessorized with a custom clear headpiece by Conrad. Though she changed multiple times throughout the night, her baby blue hair stayed fresh, thanks to her longtime hairstylist Frederic Aspiras.

Lady Gaga’s hair hues actually reflected the philosophy behind the superstar’s new album “Chromatica”, according to Aspiras. “Love inspired the looks,” he told Page Six Style after the awards show.

“Bringing all the elements of earth, wind and fire.”

Both her shimmering blue-gray red carpet tresses and lavender performance look were meant to represent the sky at different times of the day; in the earliest morning hours before the sun comes out and at dusk, respectively.

“Gaga was there for me during a hard time in my life when my mother passed away this June. I remember one day when I was at her house in Malibu, she asked me to look into the sky and [said I’d] find the spirit of my mom still with me,” Aspiras said.

He also created a custom green color for Lady Gaga to sport while watching the show at home, which she sweetly named “Suzie’s Ocean Blond” after Aspiras’ late mother Suzie L. Nguyen, who was also a hairstylist and his inspiration.

Hello Merpeople. Rocking color by @fredericaspiras named after his mother who just passed…Suzie’s Ocean Blonde. I love you Freddie 💕💕 this was extra special glamour with love 💕 🌊

To style the wig, Aspiras used a hot brush to bring out shine, then created a water ripple effect — a nod to Gaga and Ariana Grande’s hit “Rain On Me” — using a flat iron.

When you have the blues from all the news in the world today but you make it work like you always do…. @ladygaga #bts @fredericaspiras using @joico and @ghd_northamerica @theonly.agency #ladygaga #fredericaspirashair #hairjoi ##ghdhair #goodhairday #joicocolorintensity GET THE LOOK: Joico Color Intensity Formula: Inspiration: "The sky in the earliest morning before the sun comes out" Coloring How-To: Mixture 1: 1 oz True blue + 3 oz Clear = Baby blue Mixture 2: 2 oz Silver Ice +2 oz Violet Pearl = Chrome effect ) Mix thoroughly. You want to start with a Level 10 clean bright blonde hair when using blue tones. • Start off by Joico Shampooing blonde hair with Joico Blonde Life Shampoo • Next use Joico Blonde Life Brightening Mask remove any build up or off-blonde tones. • Follow with Joico Blonde Life Conditioner • Rinse and towel dry • Spray Joico Blonde Life Brightening Veil evenly throughout hair and comb thru • Dry hair thoroughly • Section hair in four quadrants. Start from bottom working your way to the top. Slice out large pieces of hair. Alternate mixture 1 then mixture 2. Continue and complete full head. Styling How-To: • Spray K-PAk Color Therapy Luster Lock Multi Perfector Daily Shine & Protect Spray throughout hair. Then apply 2-3 pumps of Joico Dream Blowout Thermal Protection throughout hair. Use GHD Detangling Comb to comb thru hair and remove tangles. Be sure to always start combing from the end working your way up. Section hair for blow drying. • Use GHD Professional Hairdryer and GHD Size 3 Ceramic Vented Brush to dry hair. • Run the GHD Glide Hot Brush threw hair to create a satin soft finish to hair surface. This brings out super shine to the color. • Creating a soft water ripple-like effect to hair by using GHD Platinum Plus to bend 1 inch sections of hair. Start this pattern from the back at nape of hair. When you approach the top stop bending hair about two inches from scalp. The hair should have no volume on top. • Apply 3-4 pumps of Joico KPAK Color Therapy Luster Lock Glossing Oil all thru hair. Use GHD Oval Dressing brush to brush out wave patten and create the soft water like ripple pattern. • Spray Joico K-PAK Protective Hairspray

For the pop star’s performance with Grande, Aspiras mixed Joico’s Color Intensity in Mermaid Blue and Clear for all-over color, then blended Blush and Violet Pearl in a separate bowl, taking care not to thoroughly mix the two to create a marbled pink and purple effect.

For a second look during the performance, Aspiras added hot pink at Lady Gaga’s roots to “mimic the sun going down and the pink becoming more intense in the sky.”

“Lady Gaga’s journey through the years has inspired me to create hairstyles and color combinations that encapsulate this journey,” Aspiras said.

“She is tough, brave, a musical genius, a visionary and an overall kind human being that believes in love and kindness in the world.” 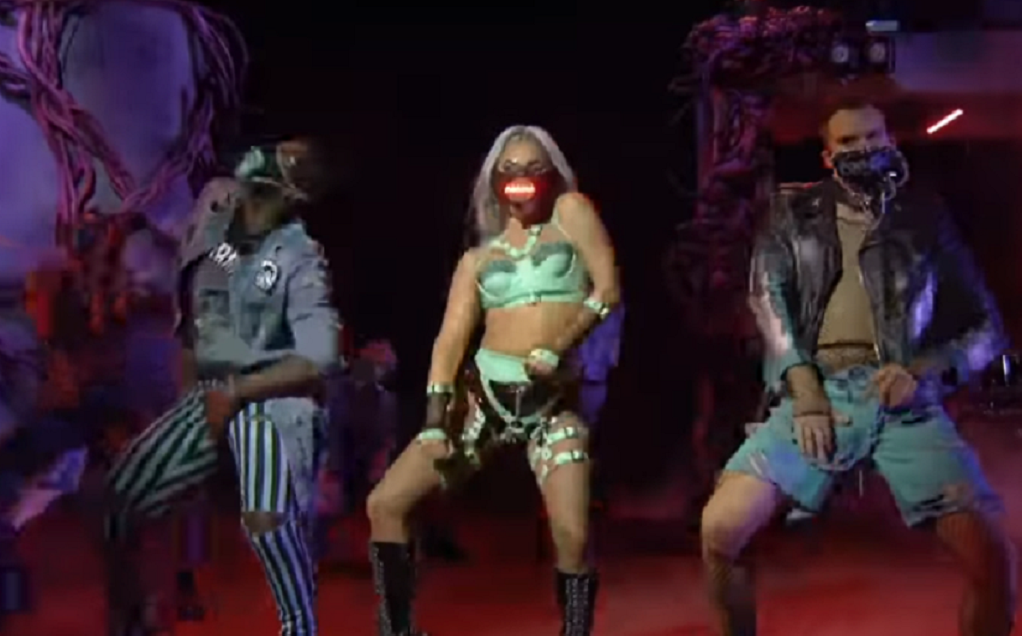 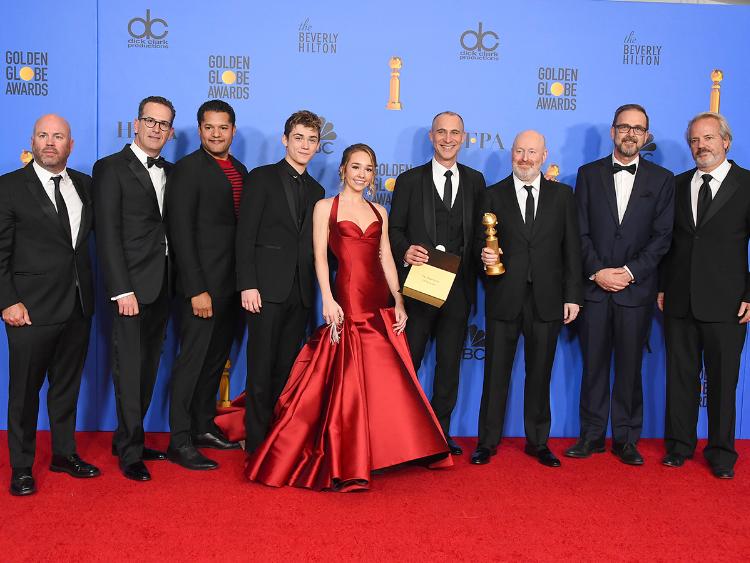